Random Shots at the Garden

Some of the best times in my life are those moments I spend in our small garden, watching things grow, nurturing a newly planted ornamental, waiting for some seeds to sprout or just  waiting  in anticipation for a new shoot to open and reveal its blooms.  I took these shots last January 1, 2010, some kind of a reminder  on what I did the first day of the year.

My Amazon  Lily is in bloom again and I just can’t help but take a shot of the virginal white flowers.  It’s one of those few plants left during the flood.  Take time to smell the flowers, so they say, and this one has a nice scent. 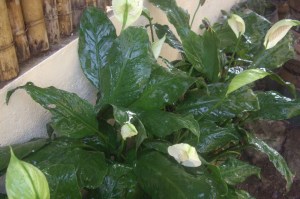 The hubby has to wash with soap  the leaves of these spathiphyllum  after they were drenched by the flood. Surprisingly though , after a few months,  a few shoots of flowers can be seen again. I have a mind to make a list of the plants which are sturdy and can still thrive despite the drenching they got. 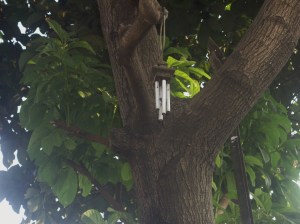 The view is nice from here.  Took this shot while trying the new hammock that we bought in Tanay.  I have one or two wind chimes attached to our avocado tree, one of which is made of different shells and this one you see in the picture.

Bing gave these Dendrobiums to me as gifts for Christmas.   The outer petals are in green but they have different shade of dark violet and a little bit of brownish pink at the inner core. 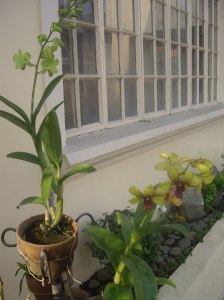 Another shot. Some orchids like this Dendrobium variety are quite easy to grow, but too much water is not good for them. They can thrive for a long time without watering.

My favorite shot, so far!  Trying hard again, experimenting with my camera.  Sometimes, it is really a hit or miss thing but who cares, I do of course! 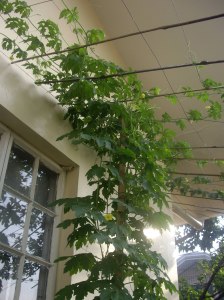 These are the dwarf variety of ampalaya which the hubby planted a month a go outside our bedroom window, I love to see greens when I wake up in the morning. 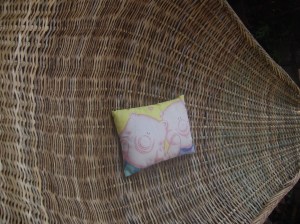 The hammock which we bought in Tanay, it’s made of  rattan. Don’t you just love watching the world go by?

Morning scene at the garden, sans the bluegrass which is all gone.

A peek on the outside world.  Just wondering, “what would tomorrow bring?” 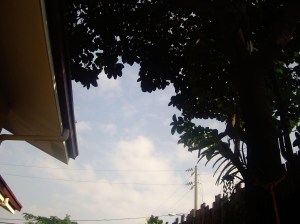 Love the fluffy morning clouds dotting the horizon, it’s so peaceful here. Sometimes I ask , “what makes you fascinating and lovely and quite mysterious”?  Whoa, one of these days maybe, I’ll write a poem about one of my favorite subjects, Clouds!

And I call  this small plot the hubby’s territory. There are squash, sweet potato, okra, lots of mustard, tomatoes and pepper to go. 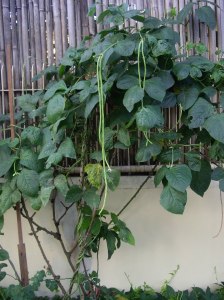 And string beans too, supplying us once a week with fresh veggies. 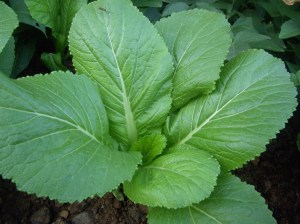 Mixed with my white and light violet Vinca.

Sweet potato vine or what we call kamote tops, good for sinigang.

That’s okra for you.

It’s Aster corner Violet Street, all streets in our subdivision were named after flowers.

The lone tomato shrub mixed with the veggies….

Would Love To See You Here

So this was Nate’s birthday gift to Nissa, an art project which he did yesterday. I love it. We could create an artist yet in him.

I took a lot of pictures of Nate when he and Obet were here last March while Nissa was in the hospital.

Back in the last week of March, my son-in-law Obet and Nate stayed with us for four days while Nissa was in the hospital, she was found positive of Covid and was confined for a week. I took advantage of the days he was here, taking photos, watching him attend his online class, singing and […]

In the Middle of the Pandemic

Kids and students here are still in the online mode in their schooling. So far Nate has done well for the last two quarters. They don’t have ranking in honors though this school year. I am sharing his grades here. Just to summarize because the online photo is so small: Christian Living and Character Education […]

Yes, we haven’t seen each other for ten months except through Messenger video chats until today. Another milestone in our lives seeing each other again. No kisses except tights hugs and “I love you Nate” and “I love you Nonna” in between. He has grown so tall for an eight-year old. Through the short time […]

That’s the smile I miss Nate. I do hope we could see each other soon. So glad to know you had a lovely birthday celebration. This is the perfect time to explore more possibilities in life. Way to go. Keep up being a good, smart and talented kid. I miss you.

Be Strong And Courageous

It’s been a while. I am reblogging this here from my main blog Dreams and Escapes. I hope you’ll find time to visit it to. My gosh, I got so excited when I saw it.  There are several designs actually and all with Biblical passages. One of the vendors in our  subdivision is selling them. […]

I can’t believe I haven’t touched and visited this blog like forever (an exaggeration of course) but I was so focused on updating my main blog so I forgot about this. Early this morning while I was watering the plants, I looked up at our jackfruit trees and saw this. I was hoping I could […]

A Leap Of Faith

I am reblogging this here for all its worth.  Thank you for reading 🙂 You might wonder how are family has been since my brother was diagnosed with rectal cancer which has metastasised in his liver. Allow me first to thank you all for  your prayers and words of comfort. It is helping us a […]

Gosh, I can’t believe it’s been almost a year now since I posted something here. I am always updated with my main blog though, a link of which is attached here. Sharing this photo I took yesterday, we locally call it Lato salad, a appetizer. I love seaweeds and I buy them once in a […]

He Is A Big Boy Now

Nonna’s joy. I think this is the second  time I posted a picture of my grandson here.   He is turning six this coming November. Time flies.  Happy Grandparents’ Day to all proud grandparents like I am.

Something To Think About

Gosh. I haven’t updated this site for so long concentrating instead on my main blog Dreams and Escapes.  I hope I would be able to post more in the coming days.

This is just my 89th post after three years of blogging. But I have always been updated with my main blog. You can find the link here on the right corner of the blog. I’ve recently took shots of our garden blooms. Summer is here and more blooms  could be seen.         […]

Something To Think About

I have a whole album of quotes that I made into memes. Some are passages from the Bible, some are words from famous people. This is one of them. Gosh, it took me so long to update this blog but I regularly post in my main blog, Dreams and Escapes. Good morning everyone 🙂

When The Sea Speaks

I want first of all, to be at peace with myself. I want a singleness of eye, a purity of intention, a central core to my life that will enable me to carry out….obligations and activities as well as I can. I want in fact – to borrow from the language of the Saints – […]

Every Flower Is A Soul Blossoming In Nature

Wild yellow flowers growing at our front gate. I don’t know its name, do you? 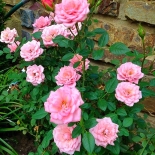 Until now I am wondering at the real name of these flowers. I only know them as pink angels.

Crossandra, I have these flowers as grown covers outside my bedroom window, lovely orange blooms that greet me every morning. 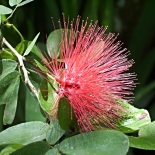 the first time I’ve seen this Powder Puff plant, i wanted to have it in my own little garden here in the city. 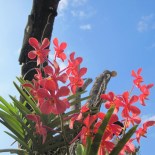